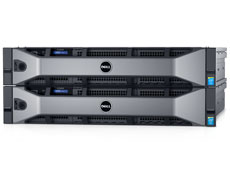 Dell recently announced the release of SCOS 7.0.  SCOS is the Storage Center Operating System, which is the software that runs Dells SC storage line, including the SCv2000, SC4020, SC8000, and SC9000, with more to come soon.  These are the products that were formerly known as Compellent.  Check out the announcement from Alan Atkinson (GM of Dell Storage) here.  So whats new?  There are a few things in this release that long time Compellent users have been anticipating for quite some time.  Lets chat about a few.

Dedupe.  The Compellent line already does compression, and we see pretty good returns on that.  They are adding Deduplication to that compression technology to round out the data reduction capabilities of the product set.  Dell is advertising an approximate savings in the 5:1 ballpark.  Based on reductions I see in other products with similar technologies, I think that is only slightly optimistic.  This is going to be applied across both flash and spinning disks, which will yield a much lower cost per GB.

These data reduction technologies are applied at the page level to those pages that have already been completely written*.  The point is that by applying the data reduction technologies to these pages that are “already written” you get a middle ground between in-line and post-process.  You get a bit of both worlds.  The upshot is that you get ZERO impact on write performance, with quick turnaround on your savings.  This is why it took so long.  I think the application is quite clever.

Quality of Service.  This is a new policy based QOS implementation that can apply to a single volume or groups of volumes.  The basic idea is that after you enable QOS, all the volumes are placed into a default QOS policy that tries to limit the scenario where 1 volume is consuming all the resources for the others.  At that point, you can then create more policies (see image below) to limit certain groups of devices by IOPS or Bandwidth.  Check out the QOS best practices guide here. 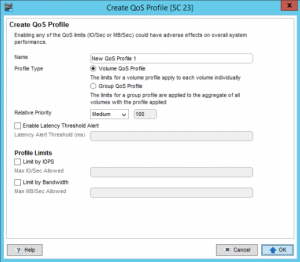 VVOLs.  This is essentially an integration between the Compellent and your VMware environment, along with the management interfaces to support them, to provide more granular control over your guests.  Instead of doing all your tasks at the datastore level, you start to perform operations at the VM level.  The Dell PS series (Equallogic) has had VVOL support for quite a while.  This support has finally come to Comnpellent in this code release.

PS Series Replication.  Since the Compellent acquisition, Dell has been promising to provide integration between the platforms.  This has finally come about in the form of replication between the PS series and the SC series (AKA Equallogic and Compellent).  This replication is bidirectional, and you can mix and match.  So the SC series can replicate to a PS series, and the PS series can replicate to an SC series.  This is all administered via the Dell Storage Manager (The new name for Enterprise Manager).

Get It.  This new code level will first be available on the SC9000 product line for new implementations.  Following behind that by a couple months will be support for upgrades and SC8000s and SC4020s.  Note that Series 40 controllers (these are older controllers from before the Dell acquisition) will not be supported by this release.

* Compellent people who may read this, note that I’m purposely not using phrases or details you might use to describe this, because I think that would be confusing.

1 Comment so far. Feel free to join this conversation.