EMC World 2016 in Las Vegas just wrapped up a couple hours ago, and I thought I would share my thoughts on the Unity product line that was officially announced here.

What it is: Unity is the next evolution of EMC’s midrange storage array.  It would fall into the traditional dual controller storage array category, and is an improvement on the existing VNX line.  The VNX and Unity will co-exist for a while, but Unity is positioned as the eventual replacement for VNX.

Lets get into the details.

First is the packaging.  Unity was built with 3 different deliveries in mind.

1. VSA – this is a virtual appliance.  It is an all in one virtual guest that includes all the data services for Unity, including snapshots, replication, tiering, and the like.  Its delivered as an OVA that requires licensing to activate. With this method, you’ll provide your own hardware. The VSA comes in a few different sizes:  A Free community supported edition which is capped at 4TB of capacity and available for free download from EMC here.  There is also a Professional Edition with licensing for 10TB, 25TB, or 50TB.  Check those out here.

What is the point of this?  Your host already needs to have storage in order to put your storage on it.  Well, I can see a number of useful applications:

– DR Target. Have a Unity array in production and need to replicate? It could make sense to use low end commodity hardware out in your DR site, maybe even just a single physical server and send your data to the VSA.  When you look at the details below, however, note how limited the replications are for the VSA.  This pegs this use case to very small environments.
– Demo Purposes. Are you an EMC partner, consultant, or similar? What a cool way to demo the interface!
– Home Lab. There are a lot of tech geeks out there with elaborate home labs. Come talk to some of us on reddit.

2. Unity will also be the foundation for some new vBlock offerings from VCE. This will couple Unity with servers and networking to deliver a converged platform built on Unity. Details on these systems are still in the works.

3. Physical Appliance / Array.  This is the traditional method of delivery for the mid-range EMC storage devices.  The Unity platform has 8 total models.  The details of these models are below.  You’ll note that there are only 4 columns for models.  Each model comes in 2 flavors: Hybrid and All Flash.  So the 300, for example is available as the 300 and the 300F.  This is a clever trick to game analysts.  The “All Flash” storage array category from Gartner and others requires that the array is not available with spinning disks.  Thus, no “hybrid” arrays.  Clearly Unity is a hybrid array.  So, to be eligible for consideration in the all flash category, they have separated the “all flash” model from the “hybrid” model.  There is not actual hardware differences between the models, as you can see in the graphic below.  This is all about looking good in the magic quadrant.  Ever notice that Dell has no offering in the All-Flash space according to Gartner?  Its because they didn’t make an “All Flash” SKU like this for their arrays.

Here are the details on the limits and configurations of the VSA as well as the various physical models:

The models are available in a few different physical configurations:

Here is what the 2.5 inch base unit looks like (Sorry for low quality.  Quick cell phone snap at EMC World):

And here is the back of it: 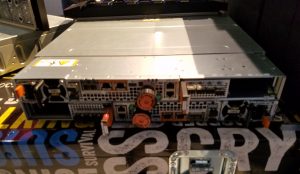 Note on this image of the rear, you can see a lot of connectivity.  Here are the built in ports:

Also on the rear, you see there are large empty slots.  One on the top right and one on the bottom left.  These are slots to load in IO modules.  Each SP has room for 2 IO modules, which allows you to customize the connectivity.  Here are the current IO module options:

Here is a view of the inside of one SP.  There would be 2 of these in each Unity device: 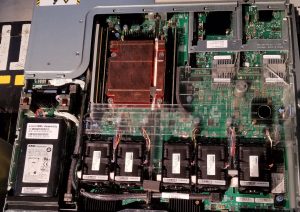 Few things to point out on this picture.  First, there is a small M2 SSD in each SP.  This takes the place of the vault on the VNX systems.  This SP will store a copy of the OS, but more importantly in the event of power failure the data cache will de-stage into the M2 SSD before powering the system down.  See that big brick in the lower left hand corner of the image?  That is a big battery designed to keep the system running until the data can be de-staged.  Definitely a nice improvement over external vault drives or standby power supplies.

Well that covers the hardware.  What is new on the software side of things?  Here are a few of my thoughts:

Overall I like it.  I’m excited about the price points they are talking about, particularly for the all-flash systems.  There may also be a play here as a backup to disk target for some low end requirements in that space.

I think we can all agree that the VNX is a well aged platform that has lagged behind architecturally for some time.  If EMC didn’t agree, they wouldn’t have made Unity, right?  Many of the newer players in the mid-market disk space have been leaps ahead technology wise for some time.  While Unity is not a revolutionary new approach to anything, it does bring the mid-market offering up to speed with the rest of the players.  The VNX has been wildly successful, and I look forward to more success with the Unity platform.