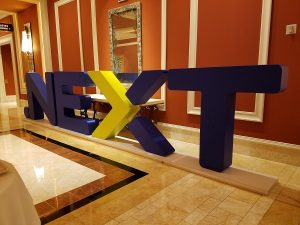 I’m on the plane on my way home from the Nutanix .NEXT conference in Las Vegas.  This years conference certainly lived up to the high standard set last year in Miami, and should be top of your list for future years.  Last year the big news was that Nutanix was going to make its own hypervisor, it was a huge announcement.  There were other things as well, but AHV took the cake.  This year, there were so many announcements, that I’m having a hard time remembering them all!  Maybe none of them were quite as big as AHV, but they add up to some serious innovation.  Here is a list of the official announcements straight from Nutanix.  Lets just highlight a few.

Self Service Portal – This is pretty cool.  Its a separate interface, still served up directly off the CVM, that provides you an already built and ready to go self service portal for your environment.  It supports role based authentication with a few pre-defined roles built in, such as administrator and user.  Once you log in, you can create projects, which you can provide with resources such as containers or vms.  When you setup a user with access to this, that user can only see projects s/he has access to.  I would have liked to put a screenshot here, but didn’t think to grab any during the sessions.  It has the same basic look and feel of Prism though, just scaled back.

Acropolis Container Services (ACS) – Nutanix is trying to bring containers into the enterprise in a familiar and easy to use way.  They have added persistent storage specifically for container services that allows the use of containers in more stateful applications than they have traditionally been used for.  I think one of the things that makes this cool is that it will be integrated with that new self service portal above, so your DevOps users will be able to provision their own stuff.

AHV X-Fit – Think of this as DRS for Acropolis.  AHV already had some intelligence here, for example, it would migrate VMs to those nodes that contained the most data from that VM.  This maintainedt as much data locality as possible through the process.  Smart.  What it didn’t have, however, was affinity rules/policies.  These have been added.  So now you can create affinity and anti-affinity rules at both the VM and host level.  Thats a useful feature for companies on the fence about trying out AHV.

ESXi Management from inside Prism – You can already view a lot of good information about your hypervisor in Prism.  One of the strengths of that platform is that it looks more or less the same regardless of what hypervisor you are running.  What it doesn’t allow you to do is make changes to your ESXi environment from inside Prism.  You can if you are using AHV, but those functions didn’t apply to ESXi.  What Nutanix announced was the ability to perform some management tasks inside Prism.  This will reduce the occasions where you have to use the much less elegant vCenter client.  This feature is not going to be in the 4.7 release, which was announced at .NEXT.  Many of these features are in that release in some fashion, but not this one.

Extended Dell Relationship – I am a loyal Dell partner.  In the anticipation leading up to the completion of the acquisition of EMC by Dell, there has been a bit of concern over the future of Nutanix’s OEM relationship with Dell.  I was happy to see Alan Atkinson, GM of Storage at Dell, announce a renewed commitment to this relationship, and an extension to the OEM agreement.  This should lay a lot of concerns to rest, and let us focus on putting together the best options for our mutual customers.

There were more announcements, things like “Anything can be all flash”, and more.  Check out that official release for details on all the goodness.  Don’t forget to check out some of my other .NEXT posts: