** UPDATE ** This platform is no longer unified.  Dell has removed the ability for the SC7020 to provide NAS services.  The system has also had its scalability limited from a drive count perspective.  Now at 500 drives.  I will keep my comments on these changes to myself.   ***

A couple weeks back, Dell made a new storage platform available with very little fanfare.  This new array, the SC7020, is positioned as a refresh for the SC8000 series.  You may recall this post, where we talk about how the SC9000 is not meant to replace the SC8000.  This is because, in the long run, the SC7020 is.

A Compellent Storage Center based offering, this new model uses a totally different hardware platform and has some big changes compared to the rest of the Dell SC (Compellent) product line.

The SC7020 has 3 slots for expansion modules, as you can see in the graphic below.  You can mix and match what goes into those modules, with these options:

There is also a 4 port mezzanine NIC, which must be selected, and you can choose from RJ-45 or SFP+ there.  With this mezz card, the system already has a plenty of IP connectivity.

Unlike the SC4020, the SC7020 does not require you to put drives into those 30 drives bays.  You can solely use external drive shelves if you like, which is the approach on the SC8000 and SC9000.  Not filling the internal drive bays makes some future operations easier, such as controller swaps/upgrades.  Also a good idea in situations where you are replacing an SC8000 with the SC7020 and swinging your existing disks behind the SC7020.  If you DO put drives directly into the controller enclosure, as I suspect most customers will, you need a minimum of 7 spinning drives, or 4 SSDs in there.

The back of the controllers each look like this.  There will be 2 of these in a given system: 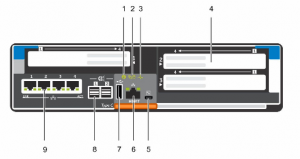 The system scales up to 500 drives, so it has less scale than the SC8000 did.  The reality, however, is with SSD density what it is, we aren’t seeing very many NEW Compellent systems with more than 500 drives.

The SC7020 requires SCOS version 7.x, which we talked about here.  This was a big release with a lot of great features in it, including Dedupe, Quality of Service, and more.  SCOS 7.x will be available on all current platforms, though some features may not apply to some platforms.  For example, the SCv2000 doesn’t do dedupe.

I think this platform has the potential to be the most feature complete and flexible product in the mid-range space.  If  you look across the industry, most of the offerings are missing at least one of these features that are real difference makers.  Its actually kind of tough to find a mature offering that ticks these 5 boxes:

What do you think about the new SC7020?  Why didn’t Dell make a bigger splash when it was released?  Let me know below!

I don’t know about you, but in my line of work, we frequently have to convert between various data measurements.  Whether this is storage capacity...

Dell SC, perhaps better known as Compellent, has finally had its end of life formally announced.  I feel like many people have been watching for...

Solution provider all-star @WinslowTG is looking at how market consolidation, a flight to the cloud, & push for recurring revenue will play out.

I was today years old when I learned that Windows Calculator can do data unit conversion right out of the box, such as GB to GiB. Here is how: https://www.rickgouin.com/perform-data-conversions-in-windows-calculator/